The mystique and all-consuming wonderment of capturing lightning in a bottle is not to be underestimated. I paused momentarily, having concerns about pushing the envelope too far and thus bleeding to death from the resulting paper cuts.  Magical ham salad- Grandma Chili365 had been regaling me with stories of 1930s tavern dances and these incredible sandwiches.

Rare indeed, these, but man I had to give ‘er a go.  Reanimating the tragically hip allure of these finger food tasties* would be like finding another pair of totally posh distance running shoes (like these Merrell Mix Masters.I have just shy of 900 miles on them.) 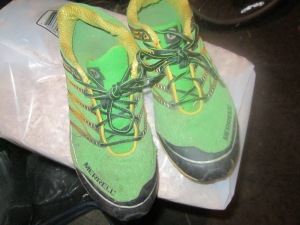 The finest running shoe ever created.

Making a psychedelically straight-edge batch of ham salad befitting of the dancing snacks from my family’s ancestral tavern would be on par with apprehending a stealthy, unicorn-riding ninja while wearing the cat’s pajamas.  Me-O-W.

*Microsoft Word HATES the word ‘tasties’.     The software was tripping all over itself to change the word to ‘testis’.    I’ll let you be the judge.  Reread the above making the awkward word substitution and let me know what you think.

While my chili ham sandwiches likely can’t rival the fantastic rural tavern fare prepared by my great-great grandmother nearly a century ago, we enjoyed today’s meal.  The chili ham salad was spread both on soft wheat and on hard rye bread.  Of the two, the wheat bread better showcased the creamy, piquant ham goodness.  The best bet would have been homemade bread, but I wasn’t able to push the envelope that far.

I haven’t seen daylight in at least two weeks.  I think someone made off with the sun.  ANYthing that reminds me of sunshine and summer is a beautiful thing.  Finger sammies with mayo make me think of picnics on the beach and for that I am very grateful.  While today’s sandwiches were delicious and much enjoyed, they weren’t exactly lightning in a bottle.  The good news is, they weren’t exactly ‘testis’ in a bottle either.

What's on your mind? Cancel reply